Small, light and manageable thanks to its barrel aligned with the bottom chamber of the barrel! The recoil is straight in the palm and the weapon remains well in line.

Revolutionary technology: the shot starts from the chamber at the bottom of the barrel, ensuring a recoil in the axis of the hand and thus a perfect control of the weapon!

Revolutionary revolvers with the particularity of having the barrel in the axis of the lowest chamber of the barrel and not the upper chamber, as on conventional revolvers.

This technical specificity makes it possible to bring the axis of recoil closer to that of the shooter's hand, thus limiting the ascent of the barrel and allowing a better control of the weapon and the firing in double tap closer together. Other features: Ergal carcass (aluminum alloy), Picatinny rails. Double and single action, except 2 "in CAD (double action only).

Category B: weapons subject to authorization. 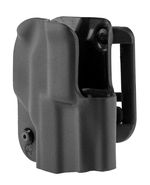 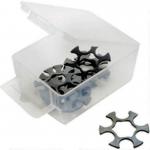 Replenishment in progress
From
39.00 € TTC

The recommended retail prices are listed as a guide..
Pictures are not contractual. Photos of product may be different with the final products.
Link this product